This term, the boarding community have rejoiced in the return of trips and tours, from silent discos to raft building, there has been something to entertain everyone.

Complete with disco lights and wood fired pizza, Reckitt House dazzled their party guests from School, Field and Fryer on Saturday 18th September, before things got competitive the next day at Wokingham Waterside Centre, as they took to the River Thames for raft building. With some rafts more successful than others, for many the session involved a refreshing swim!

Myles Nash, Director of Boarding, reflected “We have been delighted to be able to kick off our weekend activity programme again, after an 18-month hiatus. We truly have ‘pressed the reset button’ with many of our boarders enjoying varied and exciting trips and visits over the last few weekends.”

He continued “The return to normality has allowed us to come together from different boarding houses and enjoy spending time together socially both on and off the Park. With so many new students, as well as those that have not been able to spend time sightseeing and travelling within the UK, we have been delighted to be able to offer a variety of fun and engaging activities.”

On Sunday, an enthusiastic group of boarders, keen to explore the delights of the South Coast, visited Bournemouth. There was not a lot of sunbathing on the beach but the Victorian pleasure gardens are beautiful at any time of the year and this weekend were hosting a sound and light show which intrigued many of our curious students.

Moving indoors, to the cosier confines of the Bournemouth Oceanarium, the group were entertained by the lovable penguins and variety of exotic and unusual marine life on display. A traditional British meal of Fish and Chips in Harry Ramsden’s on the seafront kept everyone going and gave them the energy to tackle another British tradition, the seaside arcade games!

Tash Coccia, Assistant Head: Co-Curricular and Outreach, commented, “Our adventurous boarders took on the British weather this weekend and soaked up (excuse the pun) some culture on the Dorset Coast. The wind and rain didn’t stop them from getting most of our itinerary done but we wisely gave paddling on the beach a miss! Although we did spot some brave surfers out on the waves as we indulged in our hot chocolates!”

Heading for a slightly more cerebral, but no less of an iconic British destination, a different group of our boarders visited Oxford this weekend. Head of Business and Economics, Michael Liggins, who accompanied the trip to the Colleges on Sunday commented, “We had a great trip, despite the rain. We were able to see some of the more traditional sights such as Worcester College, Somerville, Balliol and St John’s as well as the Radcliffe Camera, and the old industrial quarter of the town. The students had lovely international food from the stalls in the market and some even managed to find waffles! The older students went shopping in the new Westgate Centre in the afternoon.”

20 of our boarders headed for High Wycombe on Friday evening for the first Roller Disco of the year. Led by resident roller blading expert Mark Smith, Head of Design and Engineering, and Becky Edwards, Housemistress of Reckitt, our students had an amazing time perfecting the art of disco dancing on eight wheels. The boarders were on great form, busting some moves on the dance floor and learning how to fall gracefully! A resounding success and multiple requests for a return visit is the result of a great night out for all.

After Open Morning a group of boarders headed for an afternoon of water fun at Liquid Leisure. Once the wetsuits were on and briefing completed they headed out onto the 50m inflatable course where they attempted to stay dry for as long as possible. However, this only lasted a few minutes as the favourite game for all those on the inflatables was tag and pushing each other into the water. A few weary heads on the way back but only until we arrived back at Leighton Park where there was a quick turn around to venture down to the cinema.

Next weekend, our busy boarders are looking forward to paintballing, a James Bond cinema trip and School House Mocktails and Games Night! 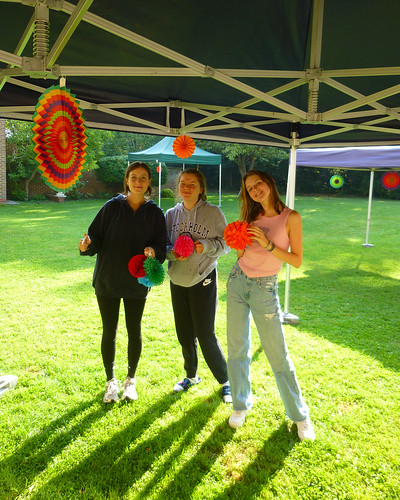