Spirits ran high on Friday afternoon as students from Years 7, 8 and 9, were finally able to board their coach with the Modern Foreign Languages Department, to set off for Northern France. “When we left the Park, the weather was looking a bit grey and gloomy, but as we approached the Eurotunnel Terminal, the skies opened up and we enjoyed the late afternoon sunshine.” commented Didier Descamps, Head of MFL.

Didier continued, “For some of us, it was the first time ever in the Eurotunnel. It’s quite impressive to see how a massive coach like ours can squeeze itself into what looks like a tiny train carriage. But our driver, Eddy, showed himself a real master and didn’t even have to re-align! Checking in at the Auberge de Jeunesse went really quickly and everyone was happy to be able to stretch their legs.”

Following their arrival and a walk along the channel into town, Brasserie Hamiot welcomed the party. Everyone was able to enjoy emincé de volaille followed by a delicious tarte aux pommes (that’s creamy chicken and apple pie)!

Reflecting on Saturday morning, MFL Teacher, Anna Murgett, said “The day started off with a walk to the city centre where it was market day. Like many towns and villages all over France, Boulogne-sur-Mer is very proud to be able to host a farmer’s market offering countless delicious treats, from rotisserie chickens, crispy baguettes, seductive sweets to colourful flowers and garden-fresh vegetables. Many simply couldn’t resist the temptation of indulging into something sweet and of course practicing their French skills.”

“During our walk we discovered why Boulogne is dubbed a ‘Street Art Hub’. We saw many buildings covered in colourful murals and countless comic-art style electric cable boxes. We walked up along the ancient walls of the fortified city built over 800 years ago on the foundations of the old Roman settlement. We stopped by the monuments built to honour Auguste Mariette, a native Boulonnais born just over 200 years ago, who became famous as one of the first Egyptologists. In his honour the city built a mini pyramid as well as a miniature obelisk. We walked into the fortified city through one of the impressive stone gates and discovered a second reason why Boulogne is famous – as a city of music!”

Next was a visit to Europe’s largest aquarium, Nausicaa, where students had the opportunity to take the plunge into dark and deep waters, meet awesome-looking sea creatures and commune with the sharks! And for lunch, after a morning at the aquarium what could be more appropriate than fish?

Fortified with a wholesome meal, the afternoon began with a visit to Escoeuilles, a typical French country-village on the outskirts of Boulogne. Here the group visited a local bakery, where the maître boulanger had been baking bread for over 150 years. Reportedly, the bread is so delicious that people are willing to drive 60 miles to buy it! Not only a tasty experience but an educational one, students learnt the secrets of the French five ingredient baguette.

Didier remarked, “His wood-fired oven had been in continuous daily use for 100 years. The wood comes from branches collected in the local forest and the ashes are used as compost in the baker’s organic garden. A truly sustainable production cycle!”

“One oven load could take up to 150 baguettes and our boulanger baked four to five batches a day. That’s a lot of bread. Students soon got their hands dirty! It was a moving sight to see how they were all needing their own dough with love to make the best possible baguette. Some had what it took to become real artisan bakers! But most were in awe when we found out that the baker starts working at midnight, which means his bedtime is at 5.00pm! Respect!”

The party left the bakery with a freshly baked pain au chocolat and a final word of advice to keep learning languages as they would inevitably come in handy regardless of the profession one ends up doing. All that hard work could only mean one thing; it was time for ice cream! In the evening sunlight, students then completed a last stint of shopping before heading back to the youth hostel for dinner and an early night after their busy day.

The final day of the three-day trip started with a guided tour of Lille, the capital of northern France and France’s fourth largest city. A lot was learnt thanks to the group’s expert guides who explained the city’s rich heritage. The visit included a tasting of the city’s most famous product – vanilla waffles! Of course, students were easily convinced to try them and some even bought more.

“Lille is a city where the modern meets the classic. While we were being taken on a walking tour of the city, others had the privilege of a driving tour in a 2CV! During our walk we came across some picturesque scenes. Did you know an underground river used to run through the city? While the water is now gone, you can still see the subterranean canals.” commented Anna.

An opportunity to explore the Sunday market allowed students to purchase a few last souvenirs before taking in the city’s beautiful architecture, such as its cathedral; a wonderful example of how the classic can be harmoniously joined with the modern. A construction designed by the same architect who created the Sydney Opera House, the building’s rear façade has been replaced by a woven fabric suspended on cables. Another vision was the Bell Tower or Belfry that dominates Lille’s skyline. In the past it was used to warn the citizens of danger or a fire, but now the tower’s bells play beautiful concert music.

The party’s final activity offered the opportunity to let one’s hair down at Cita-Park, an amusement park just outside of Lille city centre. Didier remarked “After a fun-filled day, the trip ended with a coach-load full of happy but tired students and teachers. Thanks to all for making it such a great adventure! C’est magnifique, la France!” 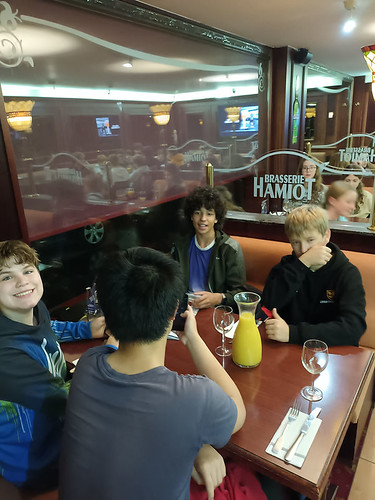