Heckles at the Ready… JBH is Back for the Summer Term!

The return of Jonathan Backhouse Hodgkin Speech Competition, commonly known as the JBH Speech Competition, on Monday 20th June saw audiences heckle and challenge speakers who took to the stage to cover a variety of topics. The annual event, held in the MMC, hosted an evening of debate across four topics. “I don’t think you can fully appreciate the event until you’ve witnessed it. The speakers are all incredible.” reflected host of the event, Head of English, Matthew Taylor.

The JBH Speech Competition sees four speakers deliver prepared speeches to an audience and panel of judges. The criteria speakers are judged on have remained the same since the competition was founded in 1914 by J B Hodgkin. With heckling from audience members, made up of students and staff alike, the speakers aim to deliver a persuasive speech with limited hesitation or deviation. Millie (Year 11) argued that ‘Public schools should be banned’, Felix (Lower Sixth) proposed  ‘Everyone around the globe should be taught English’, Timothy (Lower Sixth) argued that ‘All protests should be violent’, and Sian (Lower Sixth) discussed how ‘Sugar should be banned in schools’.

Whilst the rules have remained, the judging panel was new for 2022 and was made up of some familiar faces. Old Leightonian Joseph Barley, past winner of JBH, joined the judging panel, alongside former Host and English Teacher, Jonathan Porter-Hughes, and Dr Christa Grey, Associate Professor at the University of Reading.

The competition was intense, with Millie remarking “I have so much adrenaline right now. I don’t think I’ll be able to sleep tonight!”. By the end of the evening and after extensive deliberation, the judges awarded Millie as the winner, who was the youngest speaker of the evening – a rarity for a Year 11 to enter, but even more so to win. Joseph remarked that Felix spoke with decisiveness, and much like a politician. Sian was credited for her calm persona and ability to handle tough heckles, and Timothy was commended for integrating personal and factual elements to provide a holistic and well rounded argument; Timothy described the evening as “A lot of fun” and believed it to be a good learning experience. “I think it has taught me how to better think on my feet as the heckling was so direct.”

Past winners of JBH have gone on to have their own personal successes. Past JBH competitors and OLs include Michael Foot, one of Britain’s greatest orators and

Quentin Davis, former MP and now member of the House of Lords. “JBH is always tough, and this evening was certainly no different. All four speakers spoke incredibly well” reflected Jonathan. William, an audience member and avid heckler of the evening adds, “This is the best thing I’ve been to at Leighton Park”. 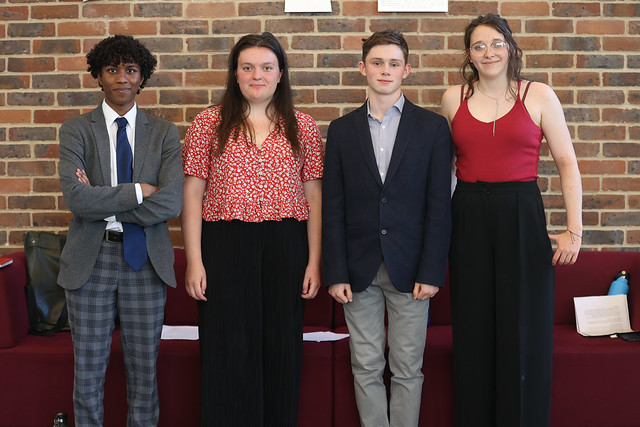