The four judges, Zak Bassman (Maths), Lauren Brandwood (Drama), Mark Wood (Art) and Jenny Powlesland (English) were tasked with an entertaining job this week as they were treated to the four performances for House Drama.

The competition required students to write, direct and perform a short, original play to the audience in Main Hall. There was one show per day during week commencing 21st November, except Thursday which was reserved for Meeting for Worship as usual. Commenting on the launch of the inaugural House Drama competition, Peter Scoggins, Head of Drama and event organiser, said, “This is a huge challenge and they have met it brilliantly. I have been really impressed with all the House Drama leaders this term.”

Cadbury’s entry ‘The Ruler’s Ruler’ exposed the corruption of power in a society fighting for change. As the people fought to overcome the monarchy and achieve change, their trusted advisor betrayed his promises and in an evil twist seized power for himself. Bentsi-Enchill centred their drama around a summer camp revealing the conflict between friendships and romantic relationships against the main plotline exploring the mystery of a missing student. Fox and Tubman each featured a murder mystery with the audience guessing throughout as to ‘whodunnit’ until the big reveal!

Antigoni (Year 10, Cadbury House) commented, “Everyone was really consistent about practices so everything else fell into place really well. I was really nervous on the day. Of course, I didn’t want to mess up because everyone had put so much time and effort into the piece. Since my character (Chris) was shouting a lot, I had to try to keep my voice level and not rush – projecting towards the back of the audience so they could hear me clearly too. I think House Drama is a great idea as it got the people from all Houses (who might not even study drama or media) to get involved in both sides: acting and tech.”

Charlotte (Year 11, Fox House) added “I extremely enjoyed working in rehearsals and on the final performance of our House Drama. Everyone from across age groups worked together as a team to put on a show for the rest of the Leighton Park community. It felt amazing to get out there and perform especially with people I haven’t performed with before. I am excited to see the next upcoming years of House Drama!”

Lauren Brandwood, Drama teacher and judge, reflected, “It’s been wonderful to see a wide range of performers, from Sixth Formers to the new Year 7’s. I was impressed with how all the Houses tackled the challenge of the first ever House Drama competition and all the students involved should be very proud.”

Fellow judge, Mark Wood, Head of Art, enthused, “Last week I , as we all have , have been absolutely bowled over by the sheer creativity and phenomenal team spirit showed in House Drama. It has been so great to see the broader talents of our students at LP. They truly are multi-faceted, and House events like this are a great opportunity to support each other while finding one’s own creative confidence and expression. So many great performances and so varied. The professionalism and commitment to making the show happen is a real credit to each House. ”

Mark continued, “The innovation showed by Fox House was particularly ambitious for the play within a play, within a play…ingenious! Other special mentions go to the leads in Bentsi-Enchill House for comedic timing and convincing characterisation. A wonderfully lively pace and energy throughout! To single out individuals within each performance is a particularly difficult task as it really was a group effort where each performance was unique and collectively, each cast performed a completely original and varied experience for the audience. The marks awarded over the week were barely more than a point of separation between each House. It was like watching clips of young actors before they became Hollywood legends. This is such a great opportunity to shine and find confidence through self-expression. Something that unites us all as human beings, which is why theatre and live drama will always hold that special magic! The collective effort and house spirit ran strong through each and every performance. 15 minutes of great entertainment and talent in the making!”

The results of the 2022 House Drama Competition were announced in Collect on Monday 28th November: 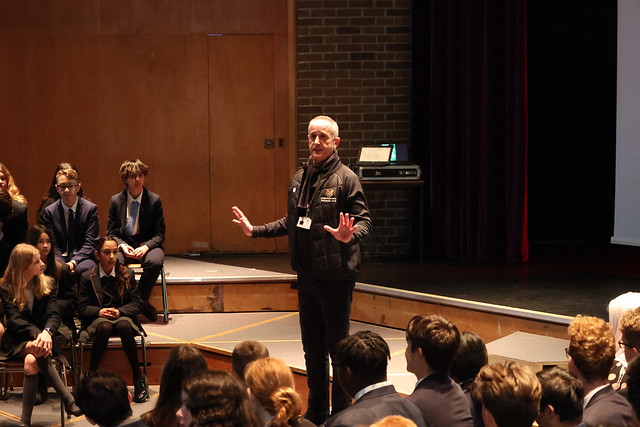