The Music Tour continued with more sunshine, singing and musical scores as the group extended their exploration of Slovenia and performed two more concerts in the second half of their holiday.

Setting off for Piran, a couple of hours by coach from their Ljubljana hotel, the students and staff arrived in plenty of time to stroll around the beautiful harbour walls and enjoy spectacular views of the coast. The Piran Minorite Monastry next to Tuesday’s al fresco concert venue was an interesting place to visit and the set up for the concert all went smoothly. Despite the gorgeous blue skies of earlier in the day the performance had not progressed too far before the rolling black clouds and heavy raindrops forced everyone to leap to their feet and speedily clear the stage of equipment and instruments; TeamLP to the fore! There was excellent camaraderie but a little less music than expected!

Wednesday offered clear skies and exquisite views of Lake Bled for the groups final concert; part of the Concert Bled Festival as the Official Festival Centre. In an entertaining coincidence the students were spotted by some of our very own Class of 2022 Upper Sixth, spending the summer inter-railing and only at Lake Bled for the day!

Following a stop en route at the Vintgar Gorge on Thursday the musicians returned to Lake Bled for an indulgent sightseeing experience. They took the Pletna boat to the island in the Lake, walked to the castle and dined in the stunning Castle restaurant; a magnificent way to celebrate the conclusion of a successful tour! 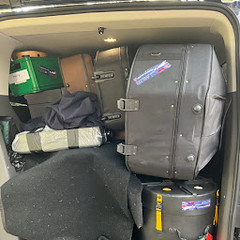