With their sketchbooks at the ready, the Art Department set off from the Park on Friday 18th October for a packed weekend of culture and sightseeing in Spain’s capital, Madrid. What the city had to offer in terms of spectacle was evident from the get-go, as they landed in Madrid-Barajas Airport; designed by architect Richard Rogers, which won the RIBA Stirling Prize for architecture in 2006. Elegant and dynamic in both appearance anduse of materials, it was the perfect gateway to introduce a city that is continually evolving and adapting to change.

Refreshed after a late-night arrival, the next morning was dedicated to visiting the Caixa Forum, a former power station and one of the most eye-catching pieces of industrial architecture in Madrid. The Caixa Forum is a social and cultural centre and museum, also featuring a vertical garden which provides a stunning green façade.The group was fortunate to have a resident guide to show us around and highlight the creative decisions andconcepts for this unique space.

Post Tapas, the group was ready for to explore the Museo Nacional del Prado, one of the largest museums in Spain as well as the principal Spanish Art museum, home to masterpieces by artists such as Goya, Bosch, El Greco, Rubens, Titian and Velazquez. The evening was spent taking in the Madrid skyline, atop of the Circulo de Bellas Artes, before heading to Madrid’s original flamenco show at a small theatre in the barrio of Malasana. The flamboyant rhythms and percussive feet seemed apt as we left to head back in what became an equally impressive thunderous downpour.

On Sunday the cohort were up and out, making their first stop at Tabacelera Art Studios. Taken over by Spain’s Ministry of Culture in 2003, the former tobacco factory come artists’ collective space, hosts some of the city’s most exciting and boundary-pushing art, workshops and concerts. The entire area celebrates art for everyone with street art and murals on every available surface. In the neighbouring El Rastro district we were entertained by the many accomplished street musicians before soaking up the eclectic atmosphere at Europe’s biggest flea market.

Glad of some sun and a seat, the afternoon focused on drawing and painting around the Grand Palace and Opera House, providing an altogether more serine view of the city. Elegant vistas opened up to reveal a different side to Madrid, in direct contrast to the morning’s hustle and bustle. The day ended with a visit to Retiro Park, where students had the chance to relax inside the majestic Crystal Palace and enjoy the work of other budding artists in one of the many al fresco cafés nearby.

On the final day the group explored the more local area of Lavapies. As they said their final farewells to Madrid, they had just enough time to catch one of Western art’s most powerful anti-war statements – Picasso’s ‘Guernica’; as big and powerful as the day it was created and housed in an equally impressive building, Reina Sofía. A lasting final impact to takeaway before our departure.

With its spirit, vitality, pulse, passion and serenity, Madrid will undoubtedly inform our artist’s work as they continue to explore the themes of opulence and contrast, light and space and fracture/fragment, in their GCSE and A Level coursework. What a perfect way to reflect on their experiences in a wonderful city!  Adios Madrid, ¡Hasta luego! 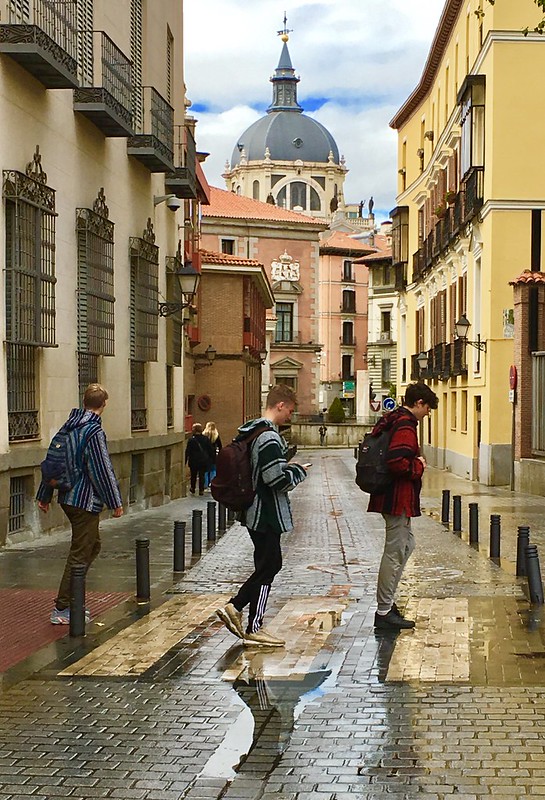 Shinfield Road
Reading
Berkshire, UK
RG2 7DE
+44 (0) 118 987 9600
schooloffice@leightonpark.com
Request a prospectus Arrange a visit Make an application
We use cookies to ensure that we give you the best experience on our website. If you continue to use this site we will assume that you are happy with it. Privacy policyAccept