On Monday 13th December, it was time for the LP All-Stars to once again dust off their games kit and get back out on the field to take on the students. Following a fairly dominant display at the end of last year in the hockey and netball staff v student fixtures, the team were hopeful that age and wisdom would again play in their favour.

Despite an open goal and incomplete team due to staff injury, students Flick, Rebecca and Chloe showed good sportsmanship by joining their opposing side and supporting the staff on their way to a 5-2 victory!

Head of Hockey, Matt Richards, remarked “The staff v student game showed to be another excellent contest, just as previous years had been. Although the staff side were missing a few players, they certainly weren’t missing any determination. An unbelievable hat-trick from debutant Alex Wallace helped the staff get off to a flying start. The students had the legs on the staff, as they utilised the skill and speed of Sandy and James, and the experience of Tia and Nic to good effect. The students ran in two goals just after half time to give them a little bit of hope, but thanks to goals from another debutant, Becky Edwards (Housemistress of Reckitt), and a well finished team move from skipper Myles Nash, the result was put beyond doubt in favour of the staff.”

Matt continued, “A great spectacle for the spectators on the side-line, and a wonderful last dance for our Upper Sixth players and Myles Nash, who have all contributed so much towards hockey at LP over the years. They will all be sorely missed.”

A bittersweet game for some, keen sportsman and Director of Boarding, Myles Nash, captained his last staff-student match, before he moves on from the Park in the new year. He said, “It was lovely to have a last run out against the students before moving on from Leighton Park. The end of season staff v students match is always a highlight for me and this year was no exception to that. It was great to play against so many students that I have coached and worked with over the years.”

Myles continued, “Thanks to all that came out to play and support and, of course, the staff team who remain unbeaten with an emphatic 5-2 victory. Outstanding contributions from Alex Wallace, and Chloe and Rebecca who were drafted in due to injuries on the staff team. A great match, well done to all!”

While Myles enjoyed his final game on the staff side, others were welcomed for the first time with open arms. Head Girl, Nic, commented “My highlights would have to be, Alex Wallace making his debut for the staff team and getting a hat-trick. I enjoyed the coming together of the event, there were people from all years plus the staff as well, either playing or supporting. It was very fun. It was a deserving win for the staff, however the 5-2 score line was not a true representation of the game.”

Flick in Year 11 added, “I think both sides played a great game, but the teachers came on top that night. I really enjoyed the team spirit for both teams and the supportive crowd.”

Alex, Deputy Head, Academic Studies, said “It was such a pleasure to spend some quality time with staff and students. It was nice for students to see staff in a different light and vice versa. My advice would be to always ensure you are on the same side as Matt Richards! I am feeling a bit sore this morning, having had a 30-year break from the game!” 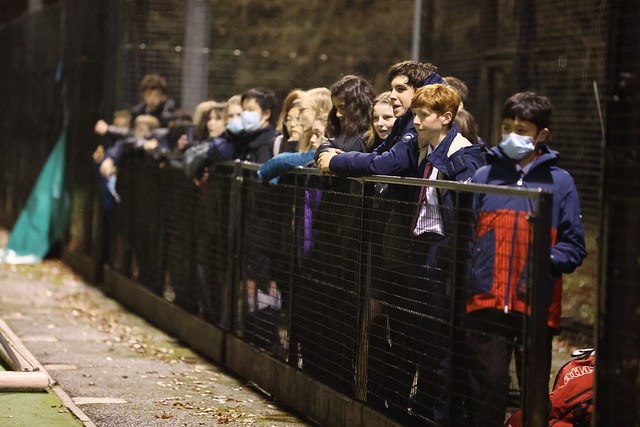