‘Tartuffe’ is a Triumph for Year 11

First performed in 1664 Molière’s French farce, Tartuffe, has become synonymous with those who exaggeratedly feign virtue, particularly of the religious kind. It was so well observed that following its original performance Louis XVI banned it, claiming that some audiences may not be discerning enough to identify its morality. For modern audiences the characters offer preposterous and hugely entertaining comedic figures much less likely to be confused with life’s realities than in Molière’s time!

Director and Drama teacher, Damon Young, acknowledged “It’s extraordinary that a play written well over 300 years ago is still quite genuinely hilarious. I am in awe of the play. It is a gift for a cast and crew as it invites us to be as creative and original as we can be in our quest to find every last laugh.” With a gorgeous array of costumes and a striking set designed by Head of Drama and Tartuffe Producer, Peter Scoggins, the play was guaranteed to delight the audience over the three nights of the run from Wednesday 24th to Friday 26th November.

The plot centres around Tartuffe, a wily imposter who infiltrates a courtly family wreaking havoc with their relationships and their financial affairs with his obstensibly devout and well-intentioned advice. The audience of course know better, as over the course of the play, does one character after another. By the denouement all is set right and a happy ending witnesses the restoration of a threatened wedding, but not before lechery, betrayal, family ruin, outrage and shock have had their moments on stage!

David who plays Orton’s brother-in-law, Cleante, and spends much of the play trying to persuade his relation to see through Tartuffe’s pious act, commented, “I was incredibly nervous before opening night but managed to get into character through practice and through using the notes from Damon; also the costumes help a bit because in my opinion it helps get you into that mindset. The stage design exceeded my expectations. It was like a ‘wow’ moment, seeing it for the first time!”

One audience member remarked “The cast inhabited their characters to the fullest and each brought a great energy to the stage. The dialogue from this period of performance can be a challenge, but they delivered it with outstanding confidence!”

Drama Teacher, Natasha Coccia, commented “Congratulations to Damon and his company for a stunning production of Tartuffe. It was very funny, extremely cool, and expertly executed (French Farce is no picnic technically for an actor or director).” 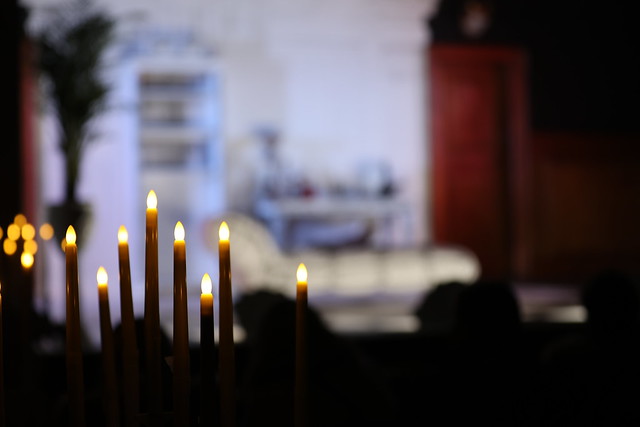