Most Colourful Cross Country Run Ever!

On 24th September, the palpable excitement of a Friday afternoon could be felt in abundance on 10-acre field, as PE Teachers, Zoe Macpherson and Freya Davis led Year 9 and 10 in a group warm up before they took to the starting line for this year’s first cross country race.

The day saw Year 9 and 10, Year 11 to Upper Sixth and finally Fryer, cover 10-acre to Grove Field whilst fellow year groups, friends, and even a rhino mascot spurred them on from the side-lines. “What a brilliant way to welcome everyone back to LP.” enthused parent and top cheerer, Diane, who came out to support on the day.

Championing Year 7 and 8 was Upper Sixth CTEC Sports group, Nic, James, Mia and Sandy, who have become familiar with Fryer for organising a succession of top-class sporting events. Taking to the podium, the PE role models led a high energy warm up to music to send them on their way.

Knowing just how to engage each and every student, the savvy Sixth Formers stocked up on paint and turned the afternoon into a fun filled colour run. By the time everyone had crossed the finish line, few were left unscathed by purple, green or orange chalk. “My favourite part of the afternoon was getting paint thrown at me.” endorsed Rohan, after experiencing his first cross country on the Park.

In a special Fryer award ceremony 12 medals were handed out to the three girls and boys in Year 7 and 8 who came in with the quickest times. However, to decide the true victors of the race, Head of Lower School, Adrian Stewart, called out “Who do we think is covered in the most paint?!”

Matt Richards, Head of Hockey, commented “It was amazing to see the whole school outside participating in an event together after such a long time away from this normality. Everyone took part in good spirit, whether that was running, jogging, or walking. The Fryer colour run was spectacular and made for a very fun afternoon. It’s always great to see the unexpected efforts put in by some students which brings the whole event to life!”

Freya Davis, PE Teacher, added “House cross country showed how much Leighton Park is a true community, where everyone is supported and encouraged to have fun and be the very best they can be.” 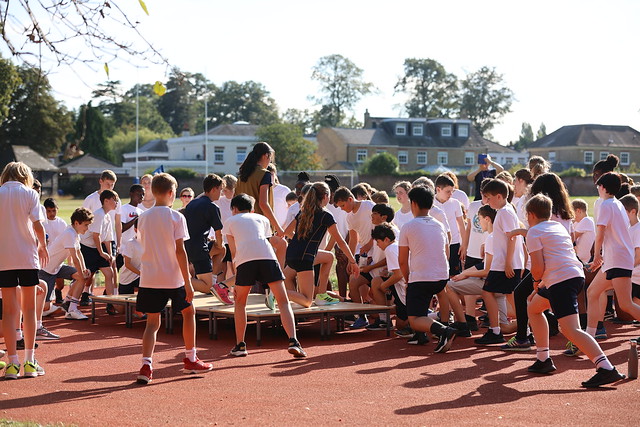